Mission
Portside Studios is the home of 901 Artists Cooperative, a non profit group of visual artists with a mission to  provide affordable working studio space for artists in Vancouver.
​
Portside Studios is a thriving community of artists in a beautiful and functional light-filled space on the waterfront. It hosts thousands of visitors during the Eastside Culture Crawl and is a vibrant hub in the cultural scene of Vancouver.
The Story Behind 901 Artists Cooperative 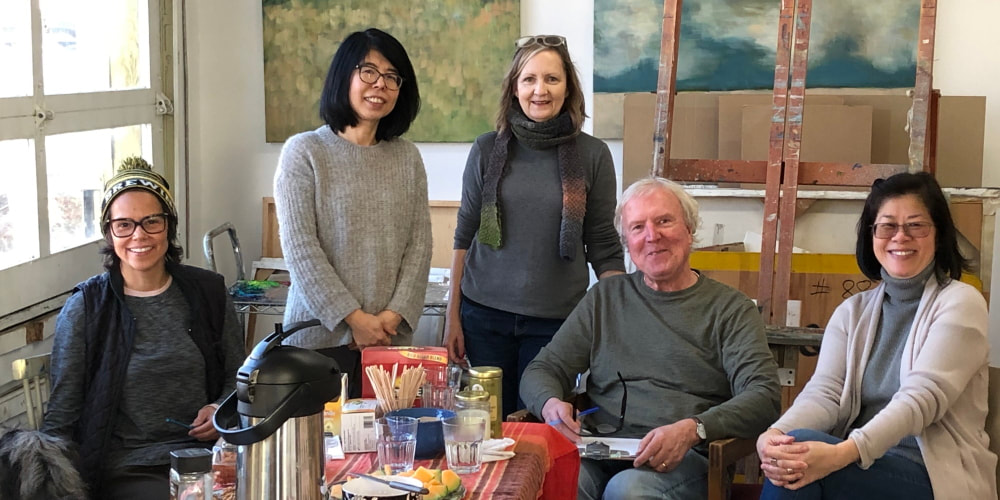 Sarinah Haba
Sarinah Haba is a Canadian painter, born in Nova Scotia, raised in Alberta and currently lives and works in Vancouver, BC. She received her BFA from Emily Carr University of Art and Design.  Working primarily with acrylic paint, ink and pencil crayon, Sarinah layers transparent washes and gestural lines building movement and depth. Using figurative, structural and patterned imagery, she explores the places where memory lives and how creative energy bridges time.

Eri Ishii
​Eri Ishii was born in Japan and now lives in Vancouver working mostly in oil painting. While having taken various art courses, Eri is mostly self-taught with the guidance of her late mentor, Norman Yates.  Her work stems from her love of oil paint, as its rich texture and colours open a portal inside of her to explore memory, psychological spaces, and identity.

Eri has exhibited her work in numerous solo and group exhibitions across Canada and internationally including Halde Galerie in Switzerland and Taiwan National Art Education Museum in Taiwan. Her work can be found in the public collections of Vancouver General Hospital, St. Paul's Hospital in Vancouver, and Kobushi Rehabilitation Centre in Japan. She is currently represented by Ian Tan Gallery in Vancouver.

Camille Sleeman
Born in Vancouver, BC, Camille studied Landscape Architecture at U.B.C. and Painting at Emily Carr
University.   Her work has been shown at the Eastside Culture Crawl, CityScape Gallery, and Federation of
Canadian Artists.

Dick Stout
Dick Stout has been an architect and painter for over 3 decades. Working in oils and in series, the past few years have resulted in a series titled ' The Fauve Ponies', 'The Secrets of Summer,' 'The Linears', ' Monochromes', 'Willows', and the mural sized series 'The Lives of Trees'.  The paintings are as much about what is not shown as what is shown, with rich colour typically favoured. Dick has been painting most of his adult life both in the U.S. and Canada and has placed paintings in private homes and offices in Vancouver, Toronto, and the United States.

Fran Alexander
Keenly interested in art throughout her youth, Fran Alexander went on to study visual arts at the University of British Columbia, graduating in 1984 with a degree in Art Education.  Fran has lived in the Canadian Arctic, and Toronto, and Europe before settling in Vancouver.  Over the past several years, she has shown her paintings in respected galleries, and has received numerous awards. Her abstract and representational paintings are now included in private collections across the globe, and is represented buy Mountain Galleries across Canada & Gallery 8 on Saltspring Island.

Andrea Elvidge
Andrea Elvidge is Executive Director at Specialists of BC fka Society of Specialist Physicians and Surgeons of BC.  As a long-standing visitor to and fan of  Portside, Andrea was delighted to be asked to join the Board as a non-artist member.